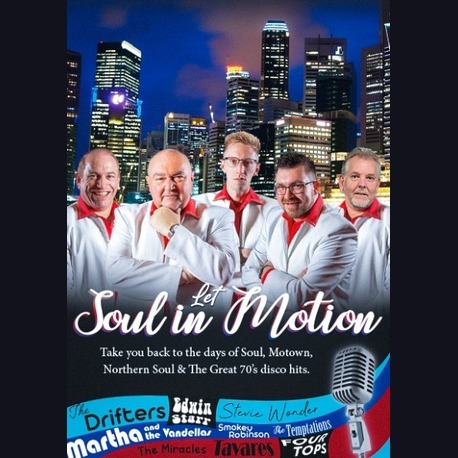 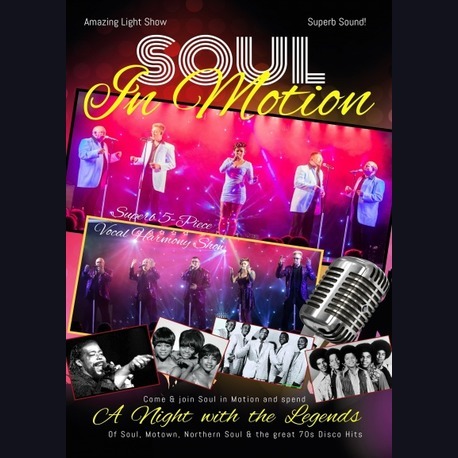 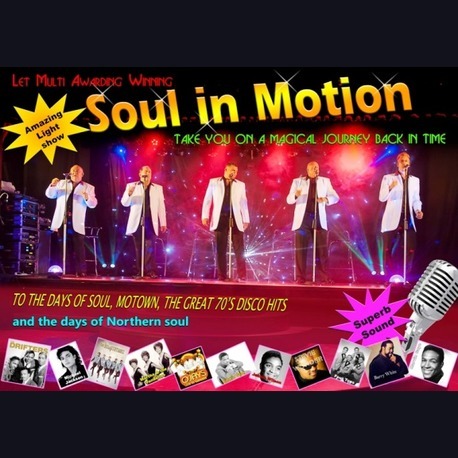 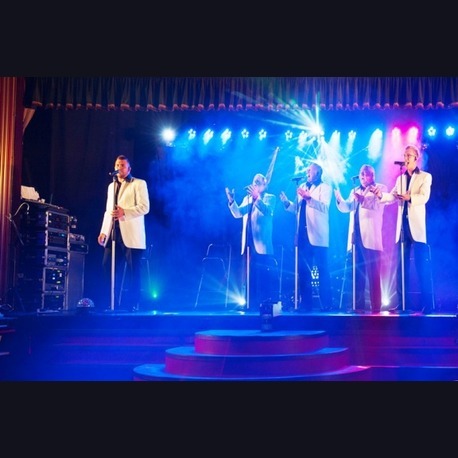 One of the highlights of Detroit was the success of motown records in the 1960s, In the 50s the label was originally known as tamla records, But the man responsible for the motown label was, Auto plant worker Berry Gordy jr.

This label Became home to some of the most popular recording artists in the world, However before motown it was the sounds of Detroit, but all in all soul motown and the sounds of Detroit has gone hand in hand throughout the years, it is very hard to define the motown sound When it was only a record label, We think that motown is covered by all three.

Its the sound of three four and five piece groups making music you just cant sit still you just need to get up and dance, it makes you feel good and forget your troubles, Even some of the great 70s disco hits have that motown feel and sound, with the added sound of Soul and Northern Soul we hope we can bring back that sound.

We hope Soul In Motion can bring some great memories back to you, the line up father and son Ricky and Azzi front the show both with strong vocals Ricky With his deep rich tones and Azzi with the strong high range together with Andy and Luke bringing the strong harmonies, and also new member Cath Jones a young lady with loads of experience from theatre and cabaret bringing in an extra strong lead vocal with some of the great female songs from Motown and especially those great 70s hits, for which we pay tribute to in the second set.

This is one of the most professional shows in club land, that is why in 2011the show picked up three awards two in Blackpool and one in Birmingham, This show brings with it the most up to date state of the art sound and lighting show, so that we try and bring the effect of being in the theatre. As a ticket show or just a normal night of entertainment makes it a must for your venue.

Wow!!! What a fantastic night was had at Barbourne Ex on 20th March. The room was packed to capacity. Thanks to all that supported the club on the night. This 4 piece group were previously known as the ever popular Re-UNITED. Talk about stage presence, they were phenomenal. The lighting was amazing. They totally captivated their audience with songs from the Motown era, incorporating The Tams, Eddie Holman, The Temptations, Franki Valli, The Stylistics, Lionel Richie and The Platters, whom they were with last year. With the added hint of Northern Soul and Azzis fantastic dance steps, all mixed with a blend of humour, you couldnt ask for more. You can understand why it takes these talented guys about three hours to set up their equipment and create a wonderful nightclub atmosphere. Ably assisting on the night was Rickys wife Sue, who competently did the lighting effects for the show. Top notch. Many thanks Ricky, Luke, Andrew and Azzi. If your club has not been entertained by this group why not speak to your Entertainment Secretary to secure a booking. Thanks to all who turned up on the night. Special thanks to Mike
Pugh who kindly compered the evening. Great job as always.
- Len Richmond. [Chairman]

Well, what a great time I had in the company of the superb soul/mowtown 4 piece male vocal groups that I think I have ever worked with Soul In Motion. The sound system, Awesome. Every corner of the room was 'speakered' up, with top of the range powered speakers, so the sound field was 100% and crisp and clear. The lasers and stage lighting that they put in was . . . incredible!! The best I have ever seen. All the PA system was top quality, very expensive - but the best I have ever had the immense pleasure to listen to, to use, and enjoy This produced a sound (and light show) that was as good as ANY concert you will go and see - anywhere. The lads did 2 unforgettable sets, and after each song, the audience went crazy for more. A lot of work, practice and tweaking have gone in to this act - and it has paid off big time!
- Tank Sherman

Motown Devotions are a female Soul & Motown Tribute vocal act, which include Melita, Donna Stanley & Traci Hanson all of which are professional soloists in their own right. Also available as a four...

The group consists of three glamorous females who have a wealth of experience as professional singers in their own right and in 2010 came together to form The Sensational Motown Tribute Show...

The Midnight Soul Sisters are a team of 8 women who are all professional entertainers and amazing vocalists.We cover the classic Motown, Northern soul, Disco, R&B, Sixties, modern pop, gospel and...

Sam's Biography Sam Newman Soul Singer Sams career started way back in the early 90s, performing with a variety of the UKs premier live music acts such as the exceptional John Oliver Band as a...